Persecution was a way of life for the early church.  Nero and other emperors enjoyed making spectacles of those who had given their life over to this "new way."  Many believers are believed to have been martyred in the Roman Coliseum, though the evidence is uncertain.  Christians were certainly martyred in other coliseums throughout the .  Mussolini later used the Coliseum for political rallies before he was toppled towards the end of the war, when Italians again used the Coliseum for a place of celebration. 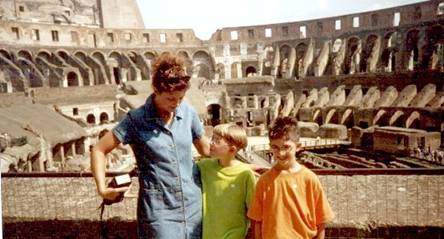 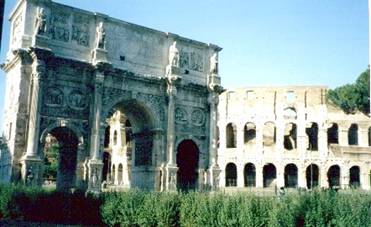 Not until 313 CE did Christians win the right to worship freely and win converts to Christ.  made this possible after a victory over his chief rival to the throne, Maxentius, at which--tradition holds-- claimed to have won by the "sign of the cross" (whatever that means).  later (332) commissioned Eusebius to produce "fifty copies of the divine scriptures . . . to be written on well-prepared parchment by copyists most skillful in the art of accurate and beautiful writing."  Furthermore, he financed the project.  Here is the arch commemorating 's victory.

Shortly after Christ died, Paul of Tarsus took Christ's message to the world.  On one journey, he preached to the Athenians on Mars Hill.  His reasoning with them was not extremely effective, at least not on a worldly standard. 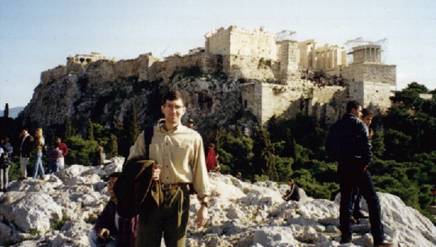 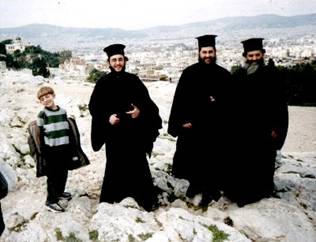 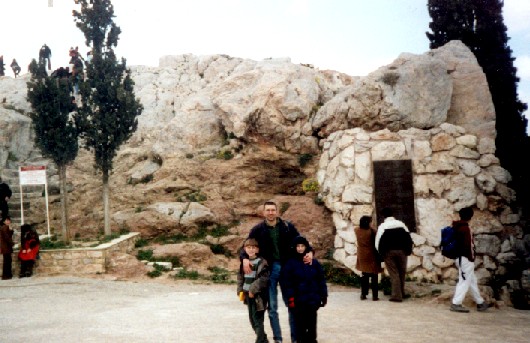 While in , Paul caused an uproar at the amphitheatre.  Apparently, he was integral in bringing down sales of "" statuettes. 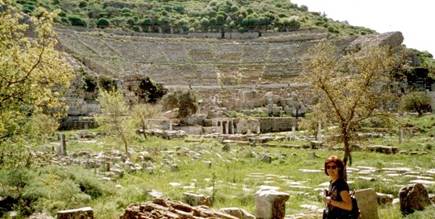 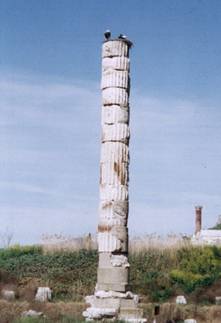 Artemis (or, ), and the last remaining

column at the , one of the

Seven Wonders of the Ancient World.  The

of Artemis was four times the size of the Parthenon

(note the pelicans atop the column, returning annually) 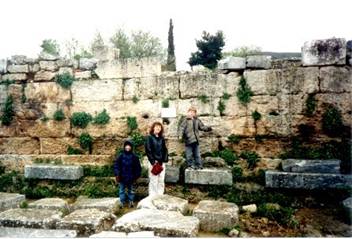 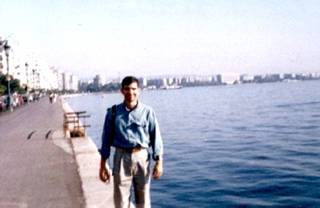 Paul visited Corinth and Thessaloniki.  Corinth, one of the three major powers in Greece during the 5th c. BCE, took part in all the battles against the Persians.  The city was totally destoyed by the Romans in 146 BCE, and later resettled by Julius Caesar in 44 BCE  Thessaloniki was first established in 316 BCE by Cassander and named after his wife, Thessaloniki, sister of Alexander the Great.  In 168 BCE, it was taken by the Romans (Dan. 2:36-44), retaining its Hellenistic character.  Paul visited Thessaloniki in 50 and 56 CE.  Galerius was brother-in-law to Diocletian (dished out the most severe persecutions Christian ever endured).  He was appointed governor of Balkans and chose Thessaloniki as his base.  The Arch of Galerius was built in his honor upon his triumphal return from a victorious campaign against the Persians (305 CE).  The Via Egnatia ran underneath the arch. 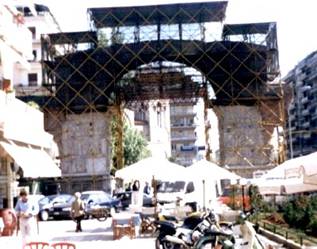 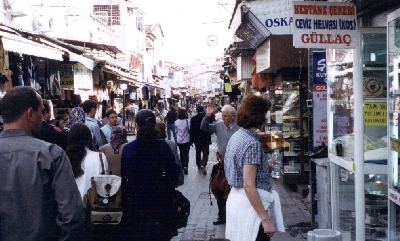 Jesus said to Smyrna (Rev. 2:9-10), "I know your works, and tribulation, and poverty...fear none of those things which you shall suffer:  behold, the devil shall cast some of you into prison, that you may be tried; and you shall have tribulation ten days:  be faithful unto death, and I will give you a crown of life."

With the help of inspired writers like Peter, Paul, and John, letters from Christ's apostles began to circulate throughout the Roman Empire.  Copies were made in various places.  Some of these copies ended up in a monastery in Egypt (St. Catherine's on Mt. Sinai).  Codex Sinaiticus is one of the most important finds in Biblical literature.  It is a 4th century manuscript which originally contained the entire Old and New Testaments, discovered by Constantin von Tischendorf in 1844.  Tischendorf said, "It was at the foot of Mount Sinai, in the Convent of St. Catherine, that I discovered the pearl of all my researches. In visiting the library of the monastery, in the month of May, 1844, I perceived in the middle of the great hall a large and wide basket full of old parchments; and the librarian, who was a man of information, told me that two heaps of papers like these, mouldered by time, had been already committed to the flames. What was my surprise to find amid this heap of papers a considerable number of sheets of a copy of the Old Testament in Greek, which seemed to me to be one of the most ancient that I had ever seen. The authorities of the convent allowed me to possess myself of a third of these parchments, or about forty-three sheets, all the more readily as they were destined for the fire. But I could not get them to yield up possession of the remainder. The too lively satisfaction which I had displayed had aroused their suspicions as to the value of this manuscript. I transcribed a page of the text of Isaiah and Jeremiah, and enjoined on the monks to take religious care of all such remains which might fall in their way."  In 1859, on his third visit to St. Catherine's, Tischendorf was walking with the steward of the convent, who invited him to him room for refreshments, and to see a copy of the Septuagint.  The steward "took down from the corner of the room a bulky kind of volume, wrapped up in a red cloth, and laid it before me. I unrolled the cover, and discovered, to my great surprise, not only those very fragments which, fifteen years before, I had taken out of the basket, but also other parts of the Old Testament, the New Testament complete, and, in addition, the Epistle of Barnabas and a part of the Pastor of Hermas. Full of joy, which this time I had the self-command to conceal from the steward and the rest of the community, I asked, as if in a careless way, for permission to take the manuscript into my sleeping chamber to look over it more at leisure. There by myself I could give way to the transport of joy which I felt. I knew that I held in my hand the most precious Biblical treasure in existence--a document whose age and importance exceeded that of all the manuscripts which I had ever examined during twenty years' study of the subject. I cannot now, I confess, recall all the emotions which I felt in that exciting moment with such a diamond in my possession." (Constantin von Tischendorf, When Were Our Gospels Written? An Argument by Constantine Tischendorf. With a Narrative of the Discovery of the Sinaitic Manuscript ((New York: American Tract Society, 1866)).  Tischendorf brought the codex to St. Petersburg to be copied.  One of the monks at St. Catherine told me the Codex was on loan and was never returned.  The Soviet Union sold Codex Sinaticus to the British Library in 1933 for £100,000.  They also have a 4th cent. Syraic version there on display (sy-s, Sinaiticus), as well as a couple more pages from Aleph.  Do you think they'll ever LOAN those extra pages of Aleph to the British Library? 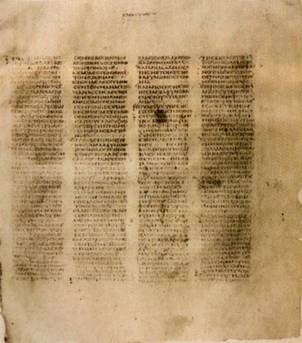 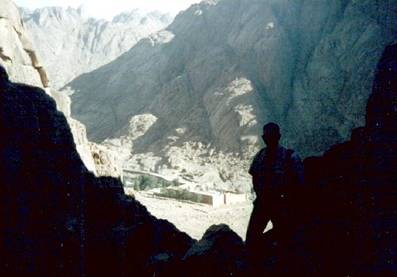 A fourth century legend held that a pagan Roman soldier called Martin of Tours encountered a beggar shivering from the cold and gave him part of his military cloak. That night he had a vision of Christ dressed in the cloak.  As a result, Martin was converted to Christianity.  He devoted his life to the church, and after his death was canonized.  Martin of Tours later became the patron saint of France and his cloak, now a holy relic, was carried into battle by the Frankish kings.  This cloak was called in Latin the "cappa."  Its portable shrine was called the "capella" and its caretaker priest, the "cappellanus."  Eventually, all clergy affiliated with military were called "capellani," or in French "chapelains," hence chaplains.

Early Church History (YOU ARE HERE)