Charlemagne (Carolus Magnus, Charles the Great) as king of the Franks (768-814) conquered the Lombard kingdom in Italy, subdued the Saxons, annexed Bavaria to his kingdom, fought campaigns in Spain and Hungary, and, with the exception of the Kingdom of Asturias in Spain, southern Italy, and the British Isles, united in one superstate practically all the Christian lands of western Europe. In 800 he assumed the title of emperor. (He is reckoned as Charles I of the Holy Roman Empire, as well as Charles I of France.) Besides expanding its political power, he also brought about a cultural renaissance in his empire. Although this imperium survived its founder by only one generation, the medieval kingdoms of France and Germany derived all their constitutional traditions from Charles's monarchy. Throughout medieval Europe, the person of Charles was considered the prototype of a Christian king and emperor.

The Hanging Church (Coptic-Cairo, Egypt) may have been originally built in the 7th century on the site of an older 4th century church. It is built on top of the Roman walls.  Tradition holds that Mark brought Christianity to Egypt.  The Coptic church soon followed. 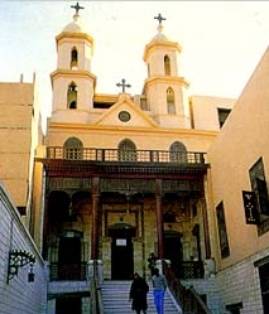 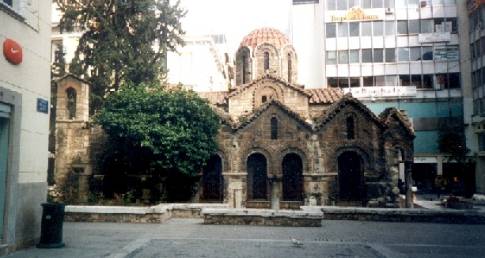 Kapnikarea Church is situated in the middle of Athens' busiest shopping street. The outside has a modern mosaic of the Virgin and Child and inside are colorful frescoes. The oldest part of the church dates from the 11th century while the rest is Byzantine brickwork highlighted by a dome supported by four Roman columns.  Rome split from Constantinople (now Istanbul) back in 1054.  Interestingly, the Greek Orthodox Church baptizes babies by immersion, since they can kind of read Greek and know what the word "baptizw" means.

This bridge, built from 1135 to 1146, is the only stone bridge in Europe still in use today.  It is a miracle of medieval engineering serving as a model for many bridge building projects (like the Charles Bridge in Prague, so named after the king of Bohemia and Holy Roman Emperor Charles IV in the 14th century).  Three times crusaders launched from this location to their objective in the Holy Land.  Incidentally, it was here in Regensburg, Germany that we find the modern military chaplaincy's roots.   The Council of Ratisbon (742 CE, modern-day Regensburg) first officially authorized the use of chaplains for armies, but prohibited "the servants of God" from bearing arms or fighting. 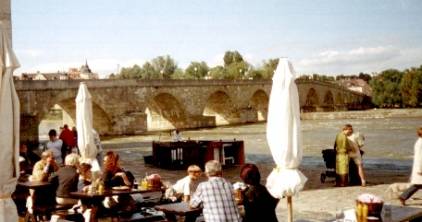 In 1245, mid-way through the Holy Roman Empire, Emperor Friedrich II bestowed on Regensburg the right of self-government with the privilege of "setting up a Mayor and Council."  It remained a free imperial city until 1803.  From 1663 to 1806 the city was the seat of the Perpetual Imperial Diet and met in the Imperial Hall.  The Holy Roman Empire dissolved in Regensburg in 1806. 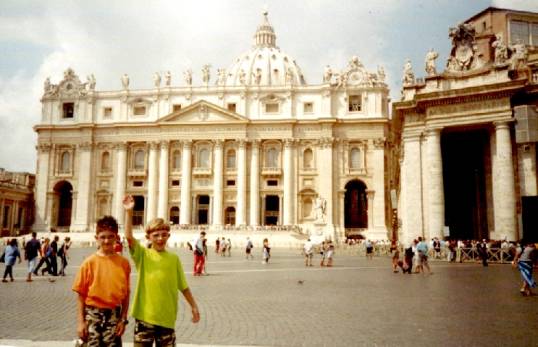 St. Peter's Basilica was began in 1452, on the site of a church built by Constantine.

Medieval Church History (YOU ARE HERE)